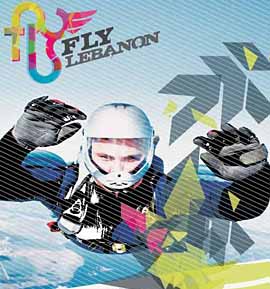 The organizers of the first Lebanese international cross country flights and shows Fly Lebanon announced that more than 150 pilots from around 40 clubs in 16 countries will color the sky of Lebanon on Sunday, May 9th, 2010 with their light water hang gliders and Ulm Pendulary in an unprecedented event to be organized in Lebanon.
Fly Lebanon Event is dedicated to sky junkies who get high on living to the extreme. Nothing beats the rush of having just the wind on your back, and this summer the sky is definitely the place to be as Fly Lebanon brings the first extreme sports event to the country.

The President of the Lebanese Aeronautics Club for Hobbyists, Chairman of “InterAvia”, Pilot Anwar al-Kozah pointed out, during a press conference held at Saint George Hotel in Beirut, that the take-off of the gliders will start on Sunday, May 9th as of 7 a.m. at Tripoli Municipal Stadium. He added that the second stop of the festival is scheduled at President Sleiman’s Cornice in Amchit at noon and the third stop at Jounieh Municipal Stadium in the afternoon.

So get your calendar out and mark May 9th as the day we bring the sky down with extreme sports events in Tripoli, Amchit, and Jounieh.

Information of this event from Fly Lebanon.