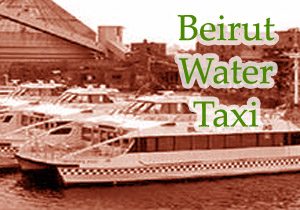 Due to the Traffic problems in Beirut and the issues related to this basic dilemma in the lives of citizens daily; A new project was put in place to help solve this problem. The project is known as Water Taxi Beirut.

The project uses the marine transportation as a solution to traffic problems which are considered optimal in Lebanon.

The main station for taxis will be in the sea port of Beirut, to be distributed to other sub-stations at ports of Tripoli, Sidon, Tyre and Jounieh and Jbeil.

Booking cards are of two types; The monthly card can be purchased from kiosks and developed specifically for this purpose in the station is dedicated to roam in areas at peak hours on the roads of any of the six-thirty in the morning to nine in the morning.

The second type of cards is used to off-peak times where not seeing the busiest roads in the choking traffic, they do not exceed the tariff Serfis official.

The process of purchase cards is up to the Tickets from the station directly through the stalls bookings to begin after the trip that takes no more than 55 minutes to the longest distance a Tripoli – Beirut.

In regards to the types of boats used:

1 – Shuttle: Shuttle, a boat that will absorb a large number of passengers.

2 – Clipper: Clipper features and Pfkhamth Ptarafth the top of the tariff.

3- VIP : your duties as moving on request and Tarafth Kaltaksi private land.

The maintenance of the boats will be at the hands of foreign specialists would be brought specially for this purpose that is later in training for the Lebanese to do the job.

As for where the boat will be for the duration of the trip to the beach adjacent to exclude the occurrence of any accidents by the waves if the weather was stormy.

He assessed that the functions of boats will be limited to the transfer of citizens within the country, including the processes of movement of tourist targets.

Khaled al-Taqi submitted the proposal to expand the roads that require much time, especially in light of the growing number of cars on the roads very fact, the conclusion is to use the sea to move between regions.

Students benefit from the resolution of a 50% tariff on the card, and the elderly are the most benefit because they can travel free off-peak hours in traffic.

It is noteworthy that the draft taxi maritime create new jobs for the Lebanese, and will include cafes known and an assigned business in the waiting area equipped with screens showing flight times.