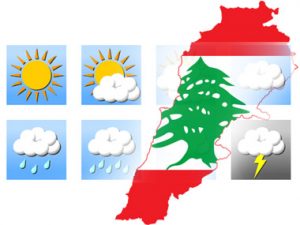 The Weather and Climate in Lebanon is one of the most beautiful in the World. Lebanon Weather used to be composed of four seasons: Winter, Spring, Summer and Autumn.

Spring in Lebanon: The spring weather in Lebanon is very beautiful, it is warm and normal both days and nights. However during the last couple of years, the spring temperature has been higher than normal suggesting a trend to what the summer temperatures are.

Summer in Lebanon: While Summer weather is supposed to be good too, the last couple of years has witnesses an excess heat which as described by many Lebanese as Unbearable. “We have never seen such high temperatures in our lives” says one frustrated Lebanese. The temperature during the summer of 2010 has reached highs of 40 degree centigrade which is considered a temperature that you only see in the Gulf of the desert.

Autumn in Lebanon: The Autumn weather used to be as beautiful as Spring, however since 2008, the autumn passes by very quickly as the temperatures during Autumn of 2009 and 2010 remains steady like a summer weather.

Best Month to Visit Lebanon: (updated 2011)
April – May is the best period to visit Lebanon.
October – November is also a good period if you can not make it in May.