Where do we go now Lebanese movie 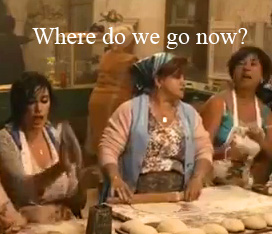 Where do we go now – Lebanese movie

Where do we go now? – Halla2 Lawen is the second long feature movie by Lebanese Canadian director and actress Nadine Labaki.

The cast was made out of amateurs that stood in front of the camera for the very first time. For months, Beirut streets were plastered with hundreds of handbills and posters encouraging amateurs to audition for the casting of the movie. Nadine is the only professional actress among the cast.

Nadine follows a number of village women from different religious backgrounds who work together to save their village from fights.

In May 2011, Nadine received an award for her second movie during the Cannes Film Festival.

In Sept 2011, The movie received the TIFF audience award which was founded in 1978 and has a reputation of being of one of the first steps in the awards trail.

The TIFF festival attendees voted for Nadine and her movie as the winner of the award. Lebanese Canadian director and actress Nadine Labaki received a $15,000 prize. Rasha Salti, festival programmer, accepted the award on her behalf since, Nadine was in Europe when the award was announced.